Adding in a more robust Web Protection feature proved to be an opportunity to address some usability issues with the original design, specifically with the navigation. The final design utilized a semantic conceptual model to simplify the entire information architecture. We also worked out  other usability kinks along the way. 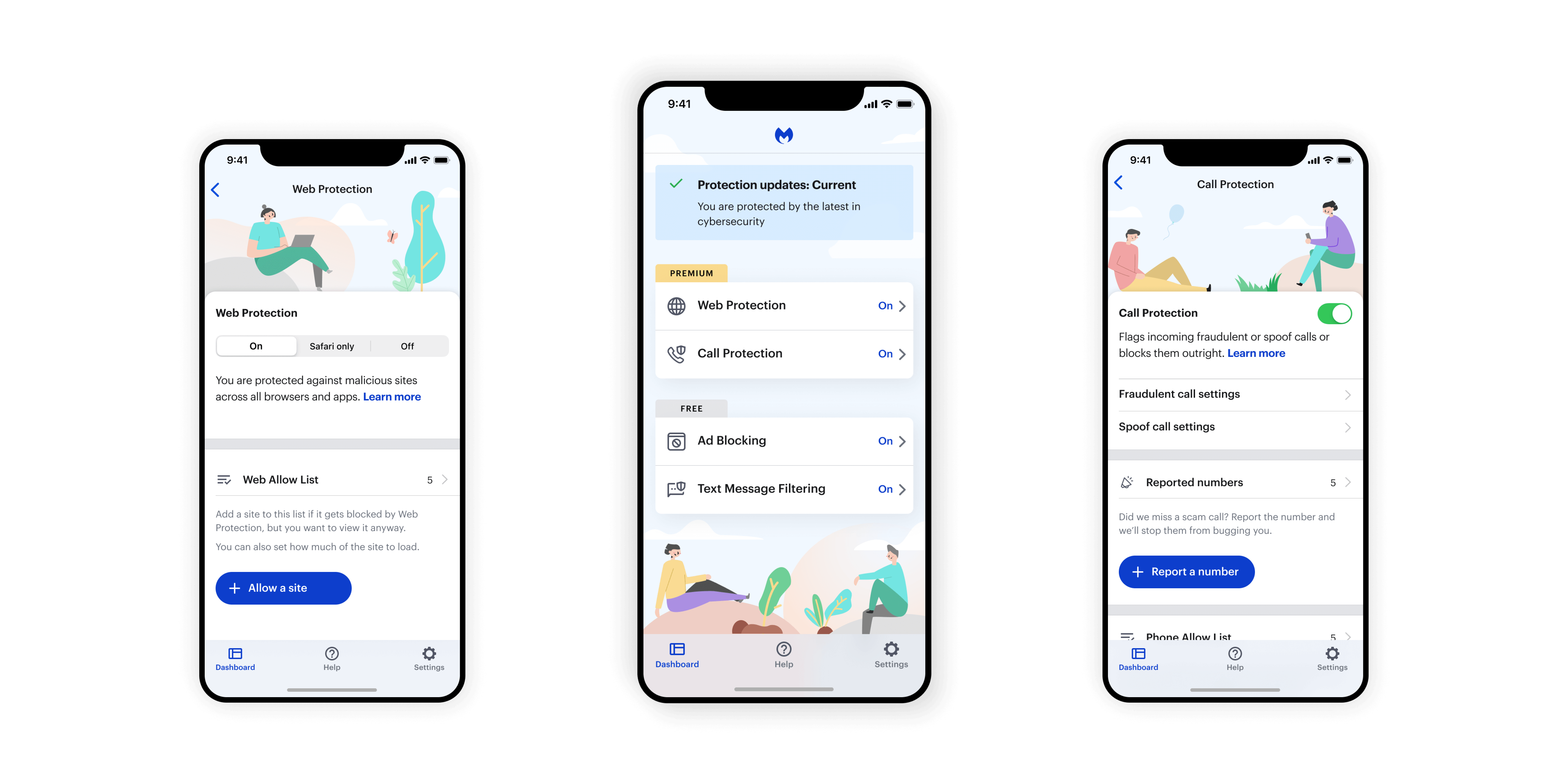 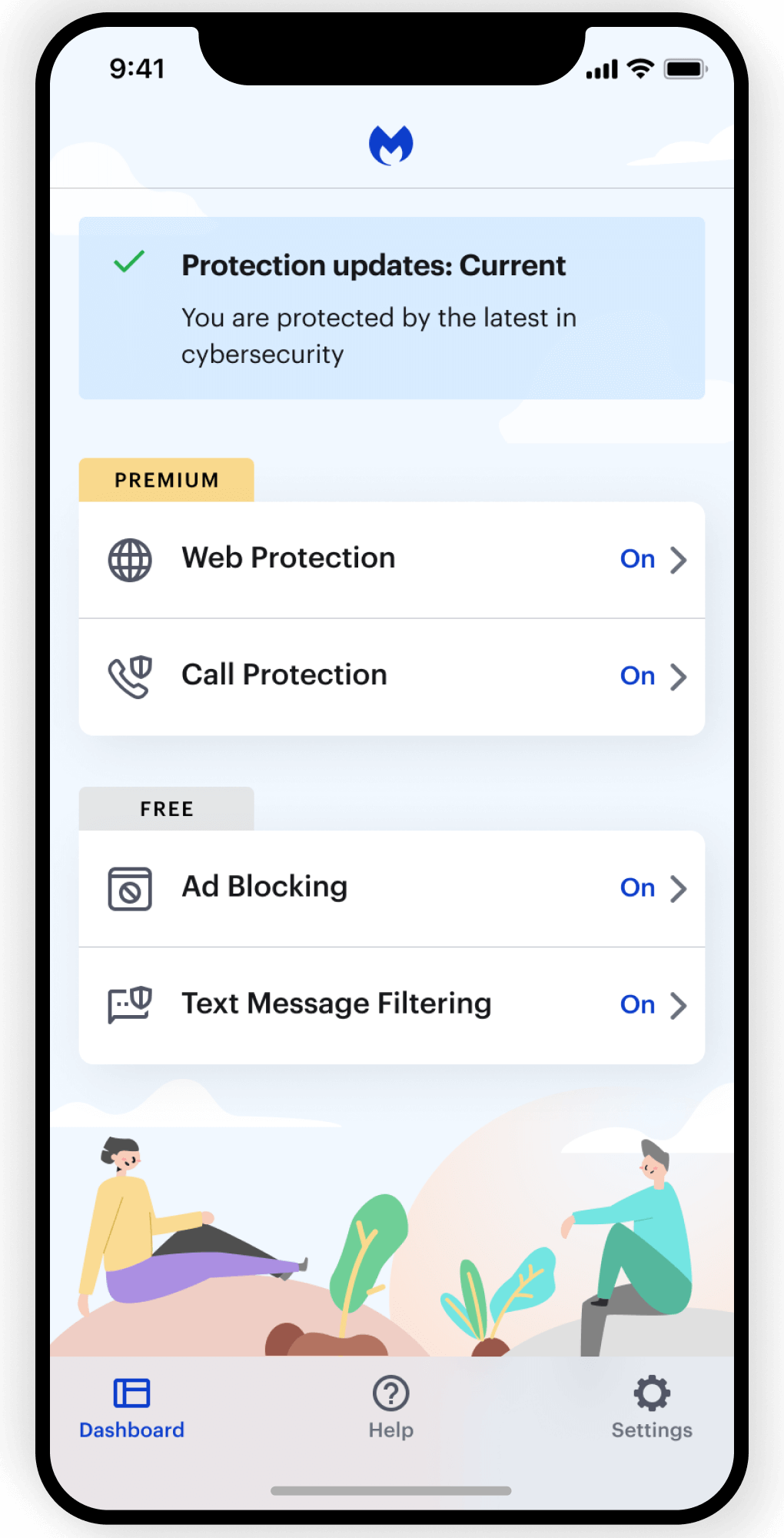 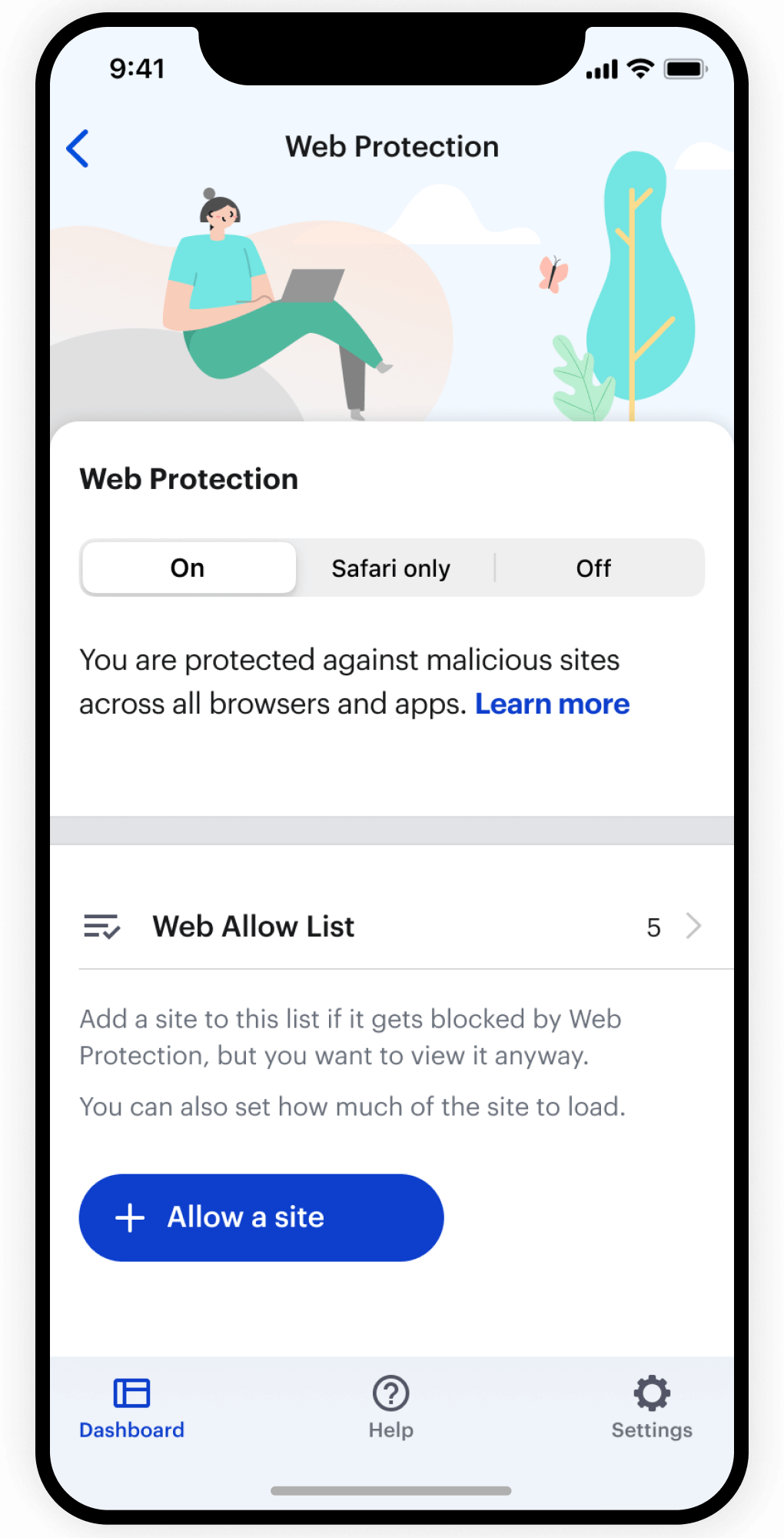 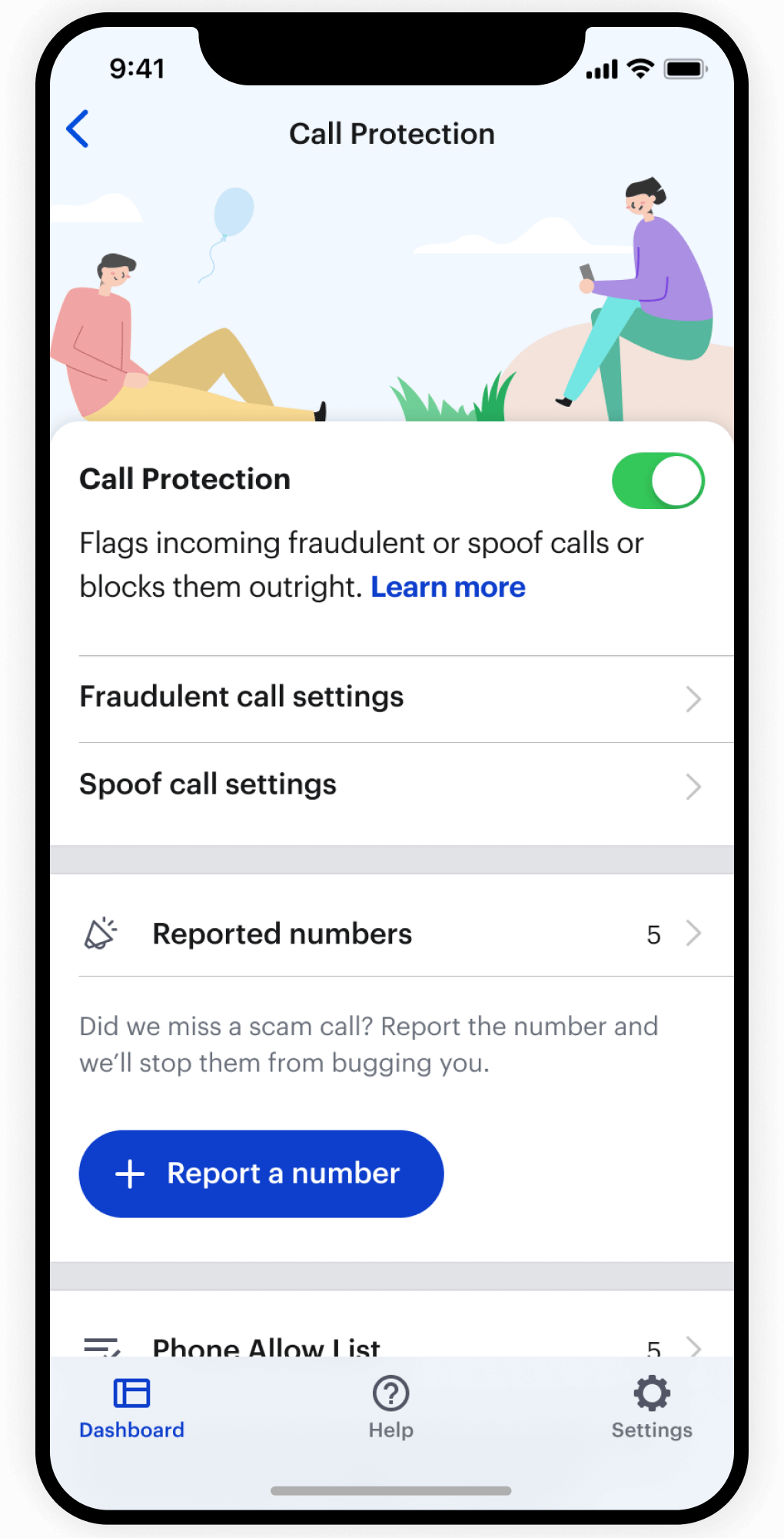 The existing web protection relied on Safari content blockers to protect users; it only worked on Safari. The new Advanced Web Protection features DNS-redirect. When a user or an app tries to access a suspicious site, we block the site and serve up a block page, detailing the type of threat and providing users with an option advance to the site against our suggestion.

How do we add a new feature that’s similar to an existing feature? We could add in another module to the dashboard. But this method seemed clunky. It also pushed the free features down. This would be problematic on smaller devices such as iPhone SE.

As I was thinking about how to incorporate this new feature, I remembered seeing old usability tests showing how whenever we asked users where they would go to report a fraudulent number to us, users would tap on the dashboard module most closely related to the task.

4
Previous usability test
These heat maps indicated an opportunity to leverage object-oriented (conceptual grammar model) design; users perceive objects as an entry point to actions and attributes.
If “advanced” and “normal” protection are attributes of the web protection object, we can append the new Advanced Web Protection feature to the existing Web Protection object.

There was an opportunity to extend object-oriented design to also address the inefficient information architecture.

The main navigation on the bottom separated out objects, actions, and attributes into different places. It held a mixture of objects (nouns: dashboard and help) and actions (verbs: allow and report).

The dashboard itself featured a mixture of objects and attributes.

5
Existing objects, actions, attributes
Using call protection as an example, users would toggle off the protection on the dashboard, go to customize protection underneath the toggle to customize the level of protection, and go to Allow on the bottom tab to allow a number we incorrectly flagged as fraudulent. 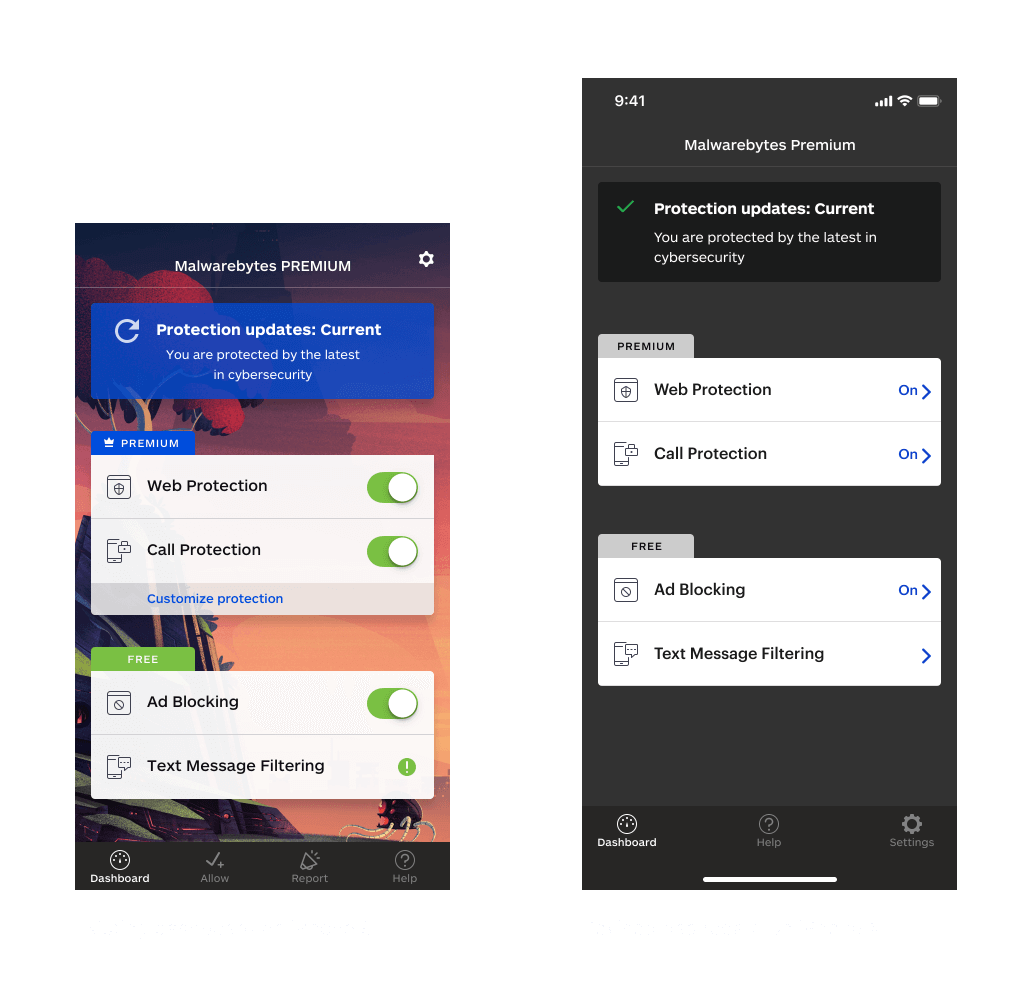 6
Existing versus new dashboard
Simplified dashboard and navigation
We can take away the complexity by grouping objects, actions, and attributes together. 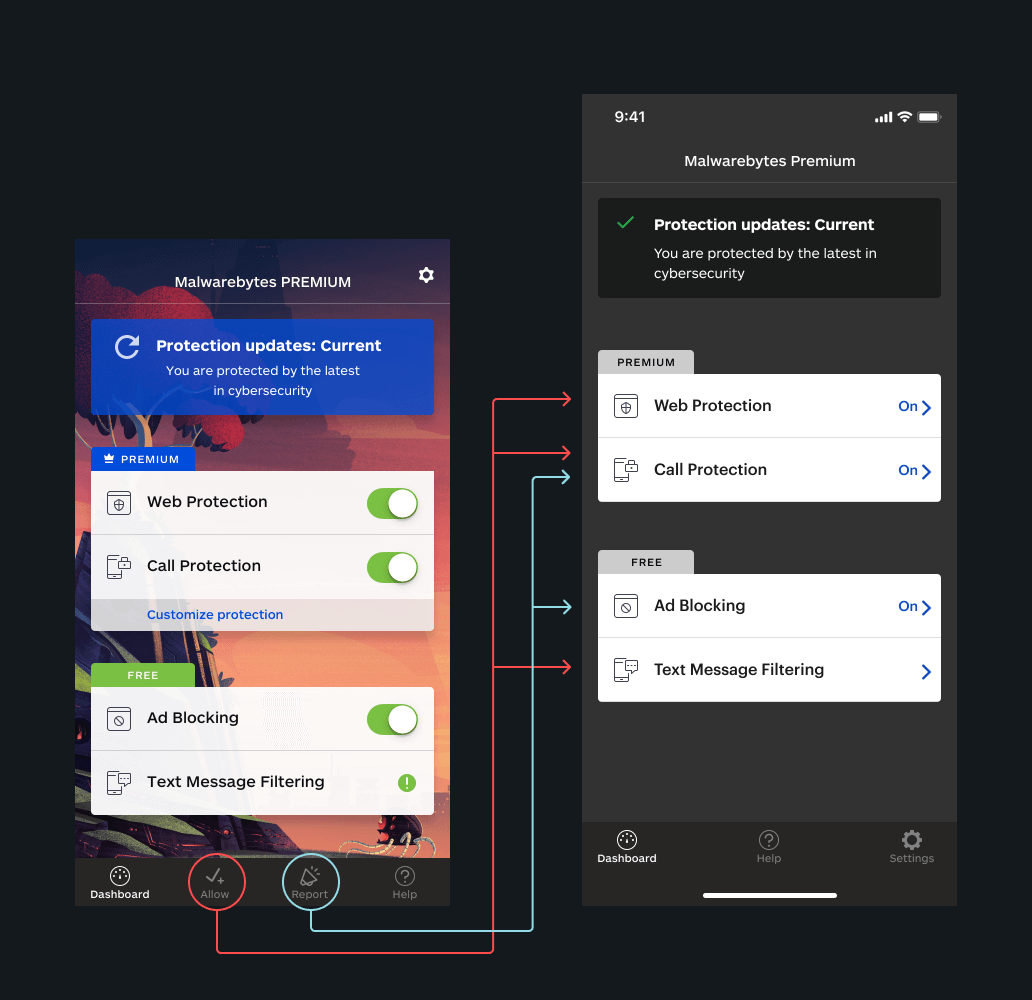 7
Existing grammar model versus new grammar model
The bottom navigation can now be simplified into 3 items - dashboard, help, and settings.

The Web Protection object holds the option to toggle on and off the various levels of protection as well as customization actions such as Web Allow List.

Instead of splitting up Call Protection actions into separate locations of Allow and Block on the bottom nav, both actions can live within the Call Protection container object.

I had planned on getting feedback on this new design from the product manager and engineers. However, I had enough time to run a quick test. With the help of the UX Researcher, we set up a quick round of testing to validate the designs.

Using Zoom, the UX researcher and I conducted moderated tests with 11 users (not all users were asked to perform all the tasks).

We asked them to perform 6 main tasks:

If a web page is blocked by Advanced Web Protection, users can use the deep link on the block page [fig 2] to advance to the blocked site. They can also manually add the website to the Web allow list to avoid being blocked next time.

When a site is allowed, the application defaults to only allowing the non-suspicious portions to load. Users can change this behavior and load the entire site. 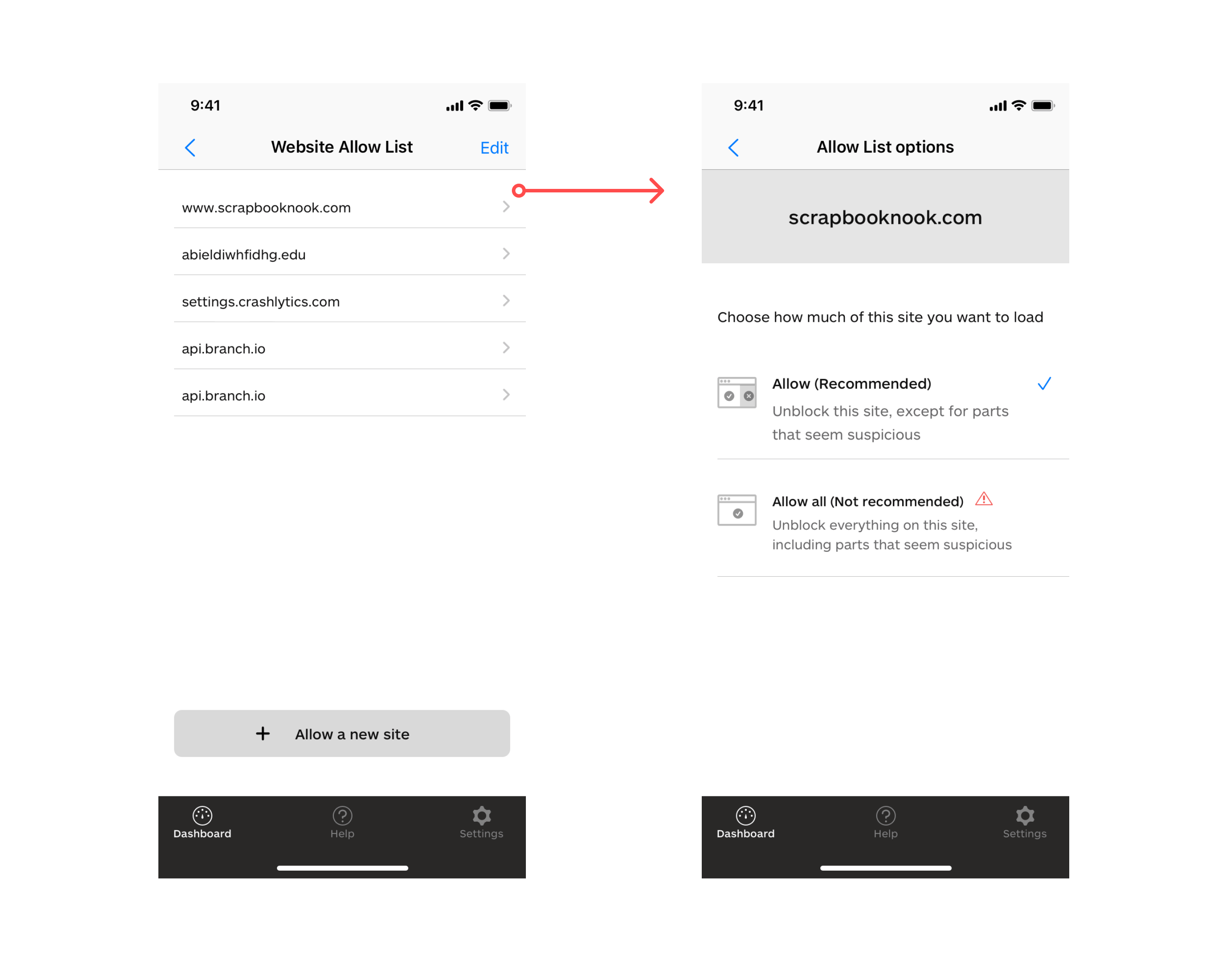 13
Web Allow options
After testing the prototype with the first 5 participants, I saw an area for improvement. The initial prototype didn’t provide feedback for the action of allowing a new website.
None of the 5 users were able to figure out where to go to “allow all of the site”.

14
Revised prototype
I revised the prototype so that there was more feedback for users allowing a new site. Regardless of where they initiate the allow action, users will land on the Web Allow List page and see the newly allowed site drop in from the top.

To address some of the issues discovered in first round of testing, I thought about changing the approach that both Advanced Web Protection and Safari Web Protection had to be on for Web Protection to be displayed as on. 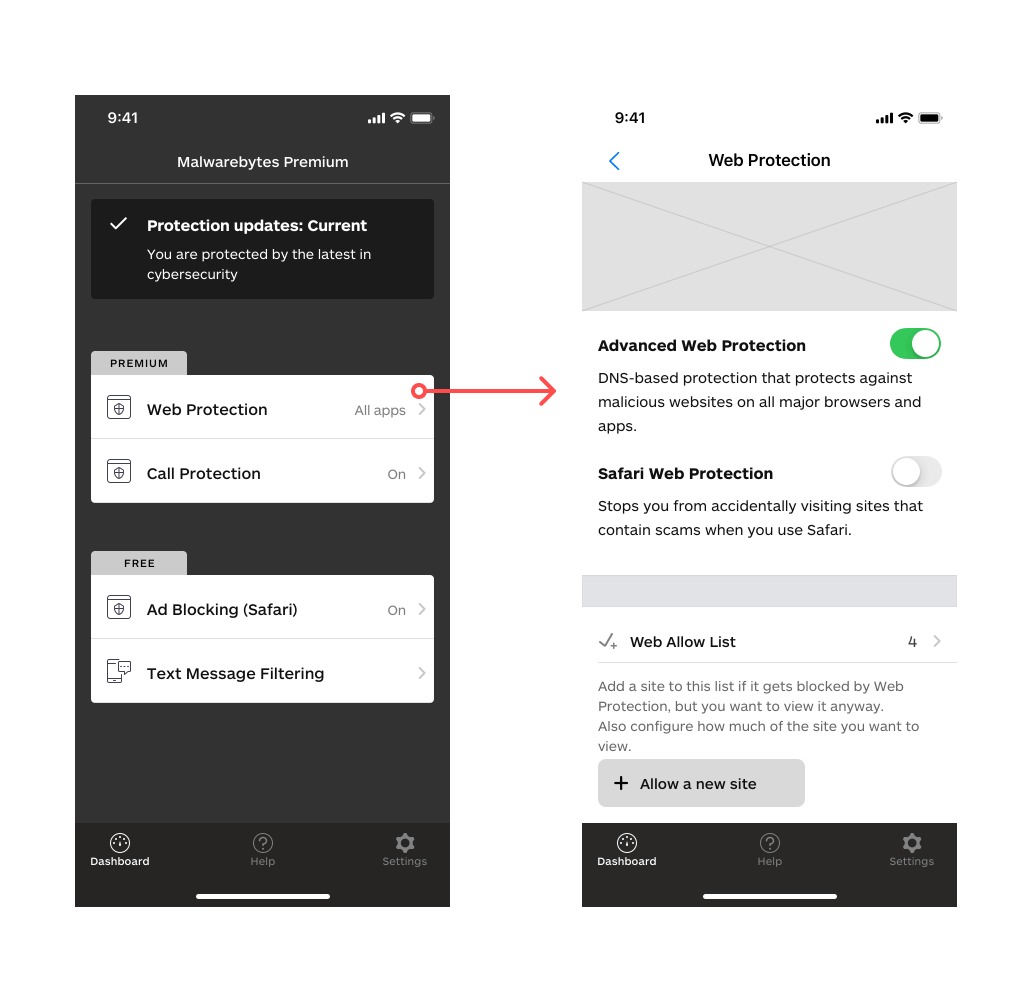 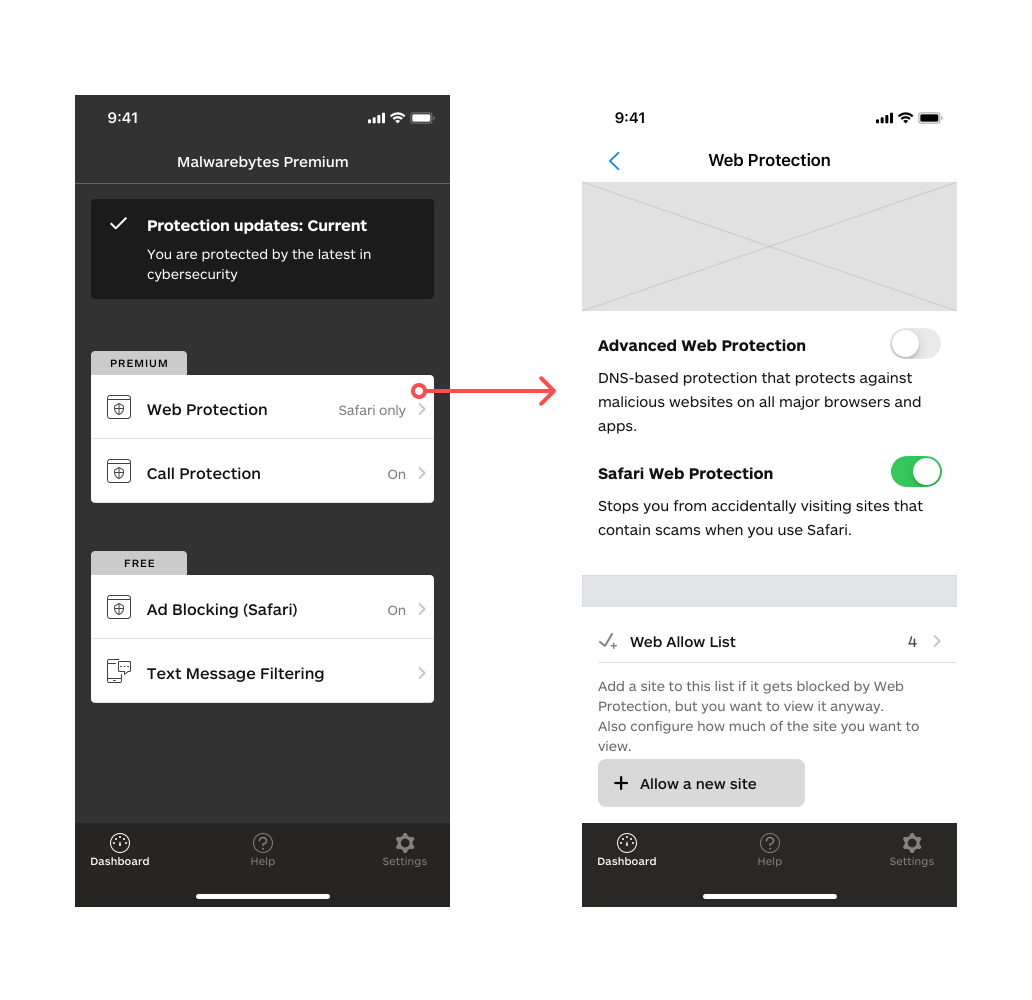 16
Safari only = Safari Web Protection
Only one or the other
But this solution was still not ideal. There wasn’t an apparent connection between the labels “All apps” and “Advanced Web Protection”.

I talked to our Product Manager. After a VERY long Slack conversation, a lightbulb flashed. There wasn’t a need for both to be on for users to be fully protected. If Advanced Web Protection was on, the Safari-only protection wouldn’t be adding any additional protection.

With clearer requirements, I decided to use a segmented control component to indicate the different levels of Web Protection.
“
I don’t see a case where both being on is meaningful...only one or the other would be on at a time.
Thomas, Product Manager 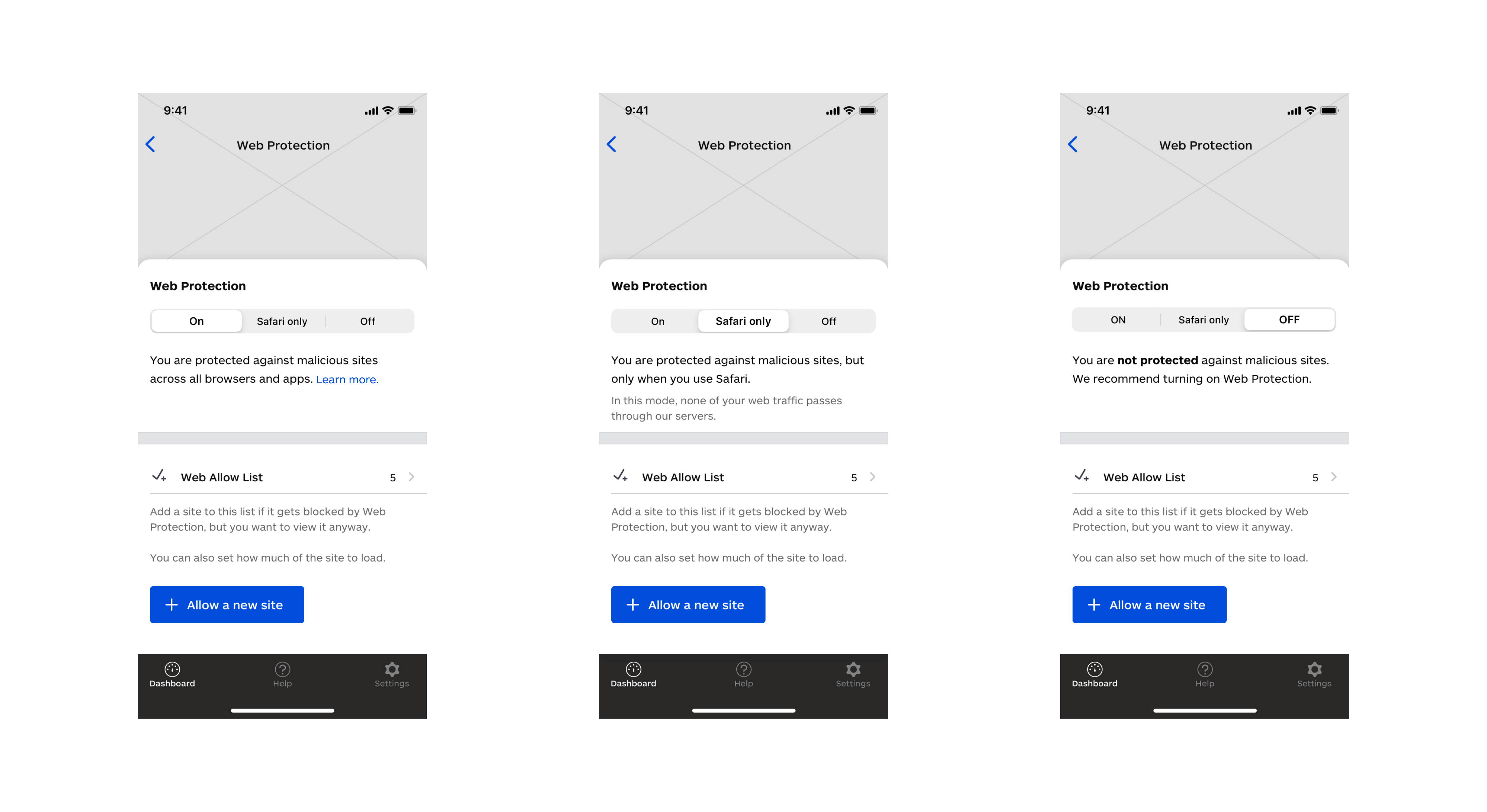 I decided to add a tool tip. For the first few times users allow a new site, they would see a tool tip pointing to the chevron, indicating more customization options.
On the customization page itself, the labels were problematic. 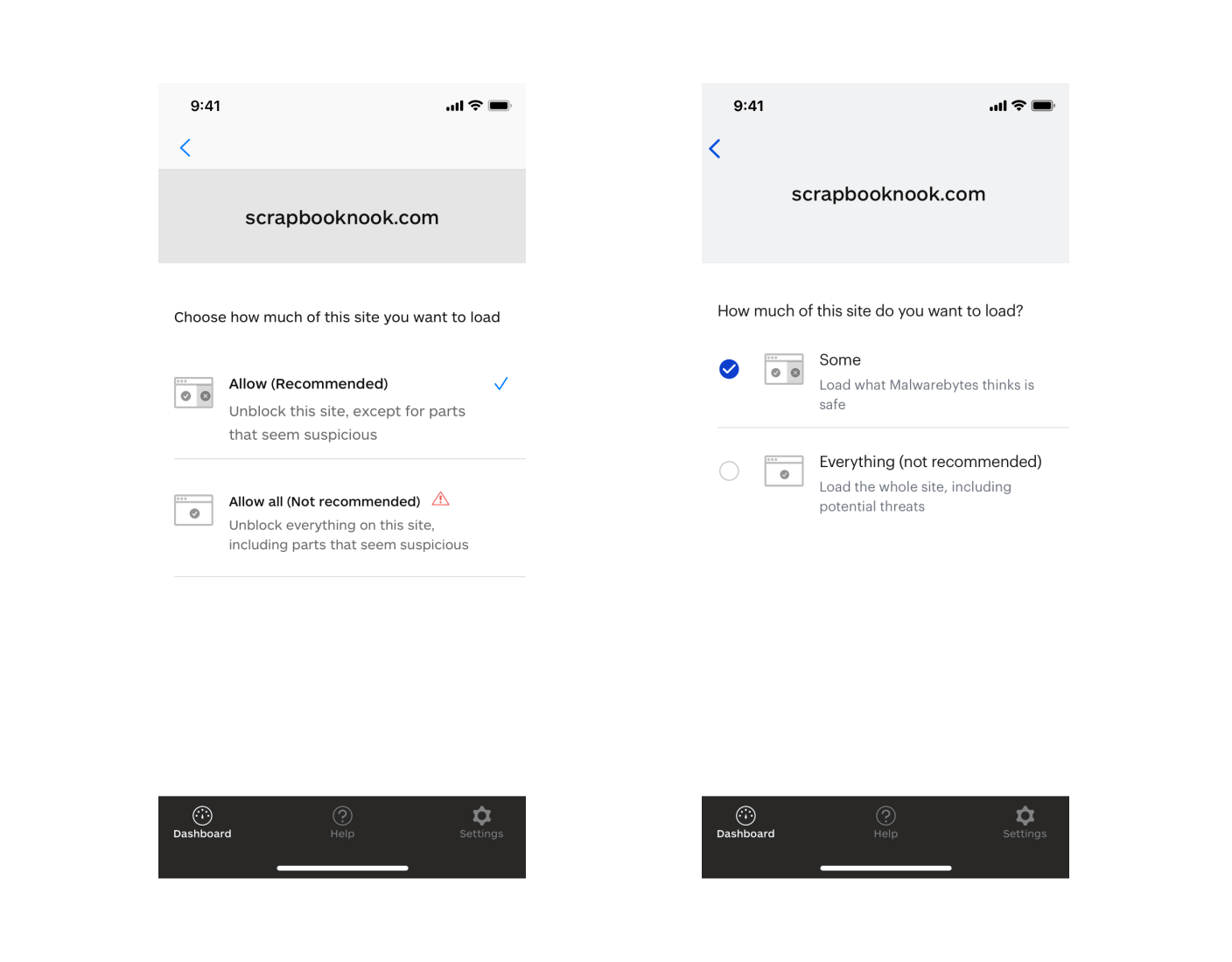 19
Revised labels for allow list options
Improving Call Protection options
Users can configure Call Protection options to their liking, for both fraudulent and spoof calls.
They can choose to be warned or to block these calls outright. The latter option would prevent them from even knowing the call occurred.

To explain this, we relied on very detailed copy, adding to the length and visual complexity of this page. Users complained about this in the first validation session. 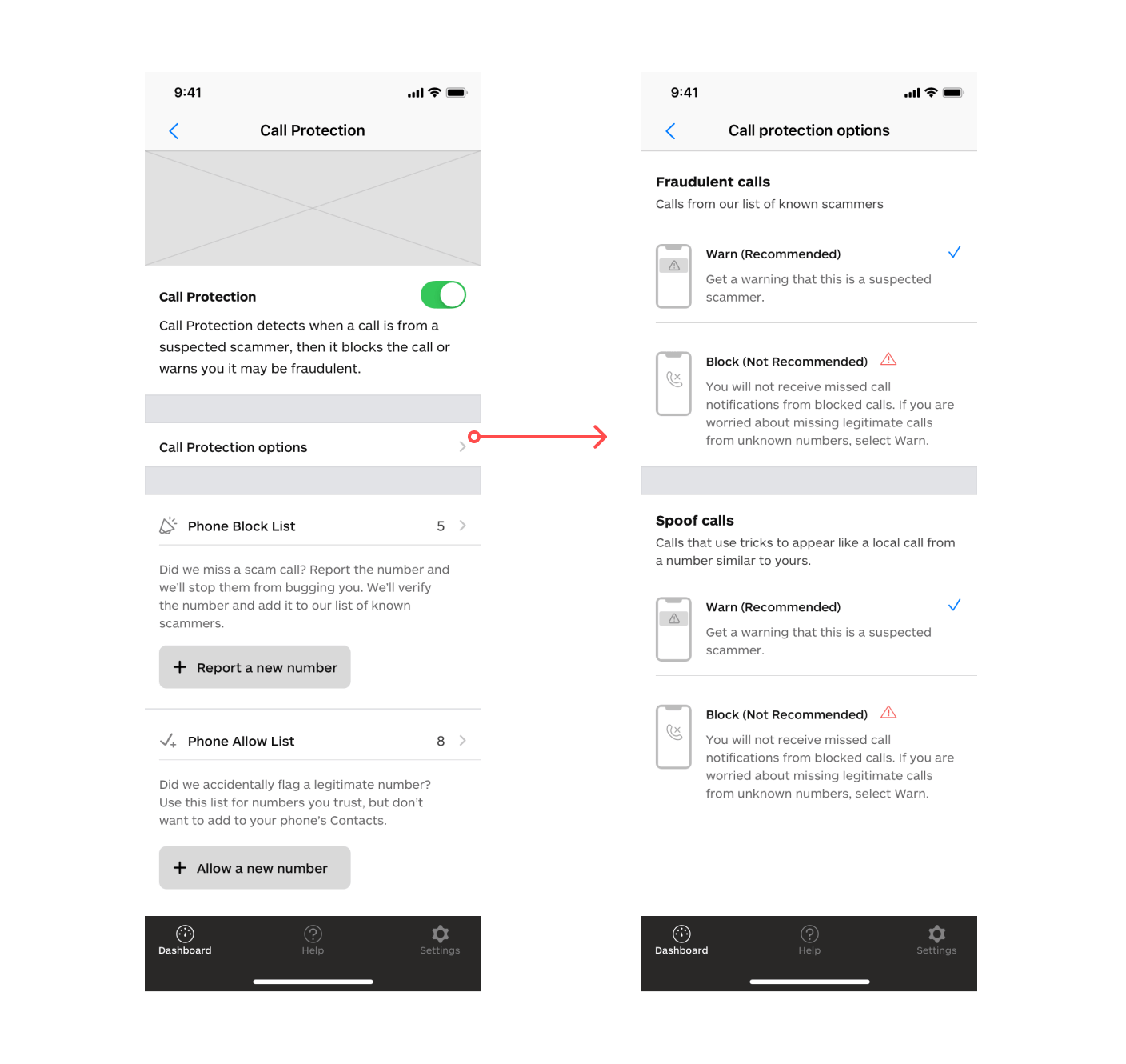 20
Existing Call Protection options
To reduce the amount of content, the UX researcher suggested toggles instead of check marks. 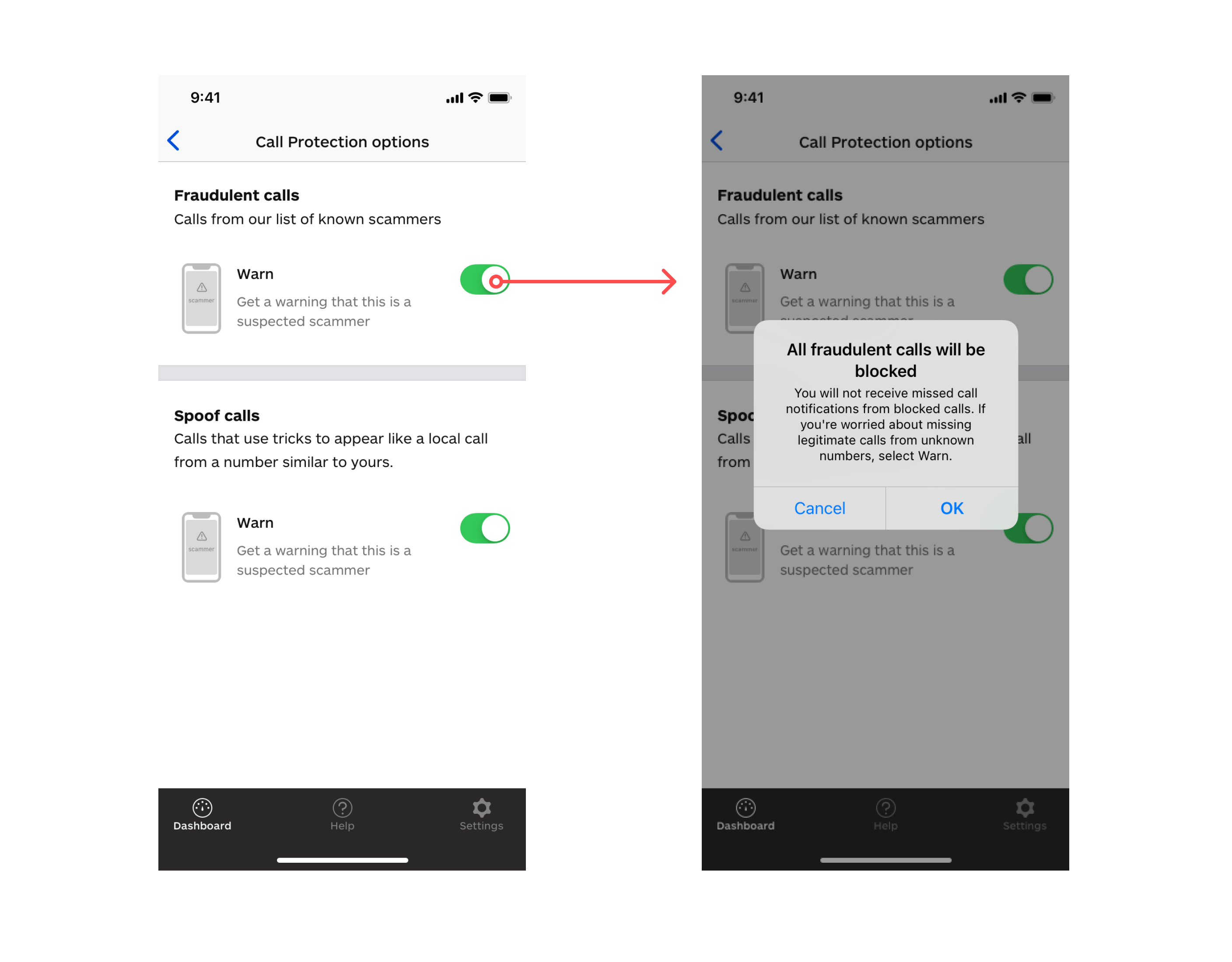 Elevating shortcut to report a number

There are two ways users can report a fraudulent number we missed to us.

One way is by opening up the app and manually typing in and submitting the number. Another way is through a native iOS phone app shortcut. The problem was that this shortcut had to be enabled first, which is somewhat complex.
The existing design featured a “Learn how” link that directed users to a support article with directions on how to turn on this shortcut. This link did not have much engagement. 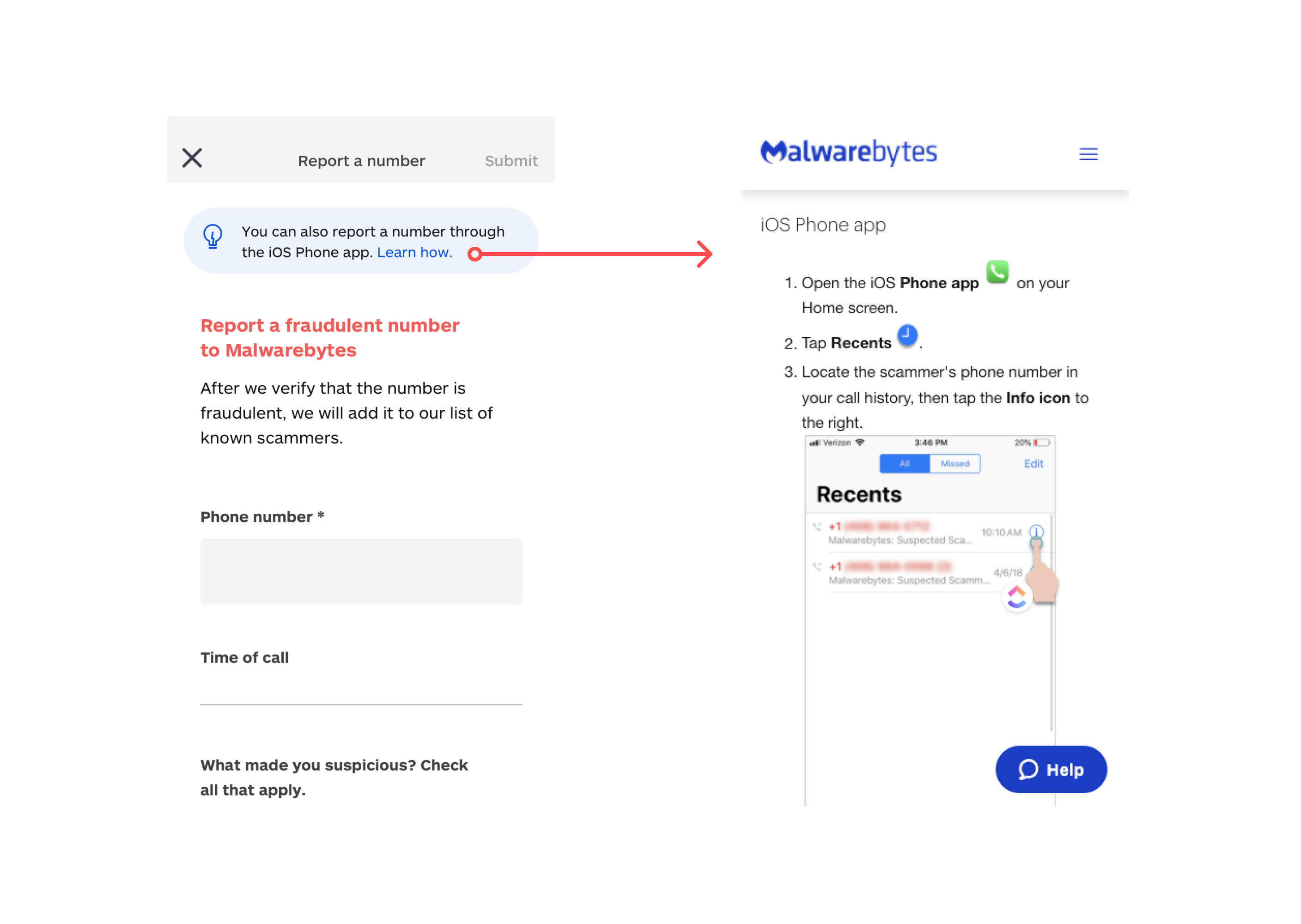 It was time to test these improvements. We wanted to see if these design refinements resolved some of the usability issues discovered in the first round of testing.

🌐 WEB PROTECTION
Task 1
Switch between different levels of web protection and explain the difference
Results
All 10 participants understood each level of web protection and the segmented control
☎️ CALL PROTECTION
Task 1
Turn off scam call warning (using toggles)
Results
Some participants were confused about turning off warning to block calls
Task 2
Feedback on slideshow to demonstrate the shortcut to report a number
Results
Most participants naturally noticed the slideshow, did not find them distracting, and said they would definitely use this shortcut to report numbers

Using toggles for call protection options still proved problematic. It wasn’t very clear that “on” meant users would get a warning screen and that “off” meant all fraudulent calls were automatically blocked. 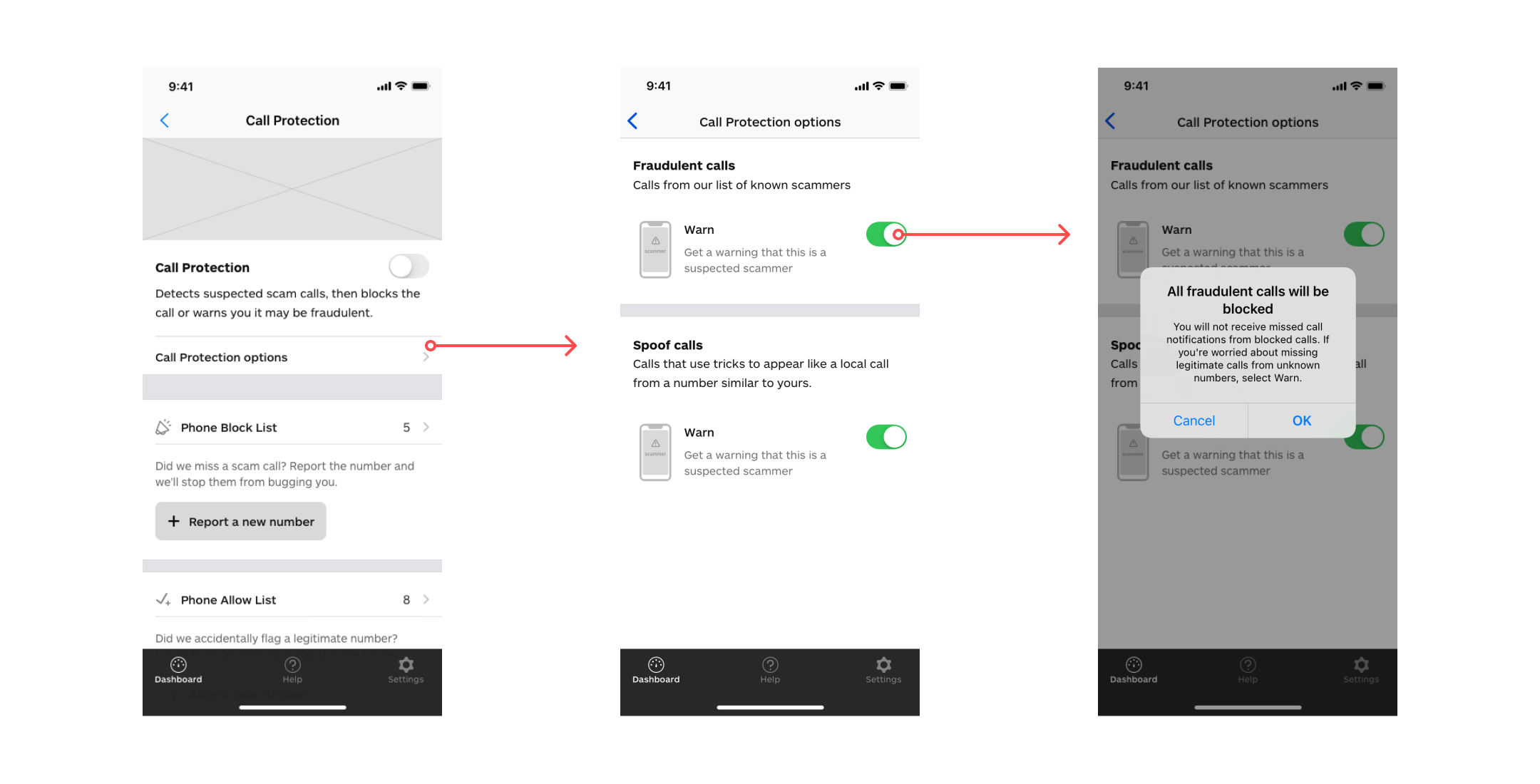 25
Toggles to control the warning screen
I designed two options to address the confusion and we tested both prototypes. Both prototypes started with a warning screen users would see in the event of a fraudulent or spoof call. Then, we would ask users to turn off this warning while still having Call Protection enabled. We wanted to observe how users interacted with both options and which was their preferred design.

To save time, the UX Researcher and I decided to conduct a hallway test with 8 Malwarebytes employees who rarely interacted with our products.
Version 1: Toggles
In this updated version, we decided to change the option to block and it would default to being off. Explanatory content underneath explains what turning on block means.

Version 2: Checkmarks
We also tested a check marks version. Users have two options, with the flag incoming call option being defaulted to. I also added simple imagery here to accommodate the microcopy.

The results were a toss-up.
‍

We decided to go with the check marks version because it was clearer than the toggles version. There would be less room for confusion as users saw both choices - warn and block - at the same time.

Also, it seemed contradictory that users can toggle on Call Protection but then toggle off the warning. Using toggles to control both the Call Protection object and its attributes was problematic.

To decrease the density of the content, I decided to break fraudulent call settings and spoof call settings into two separate screens. 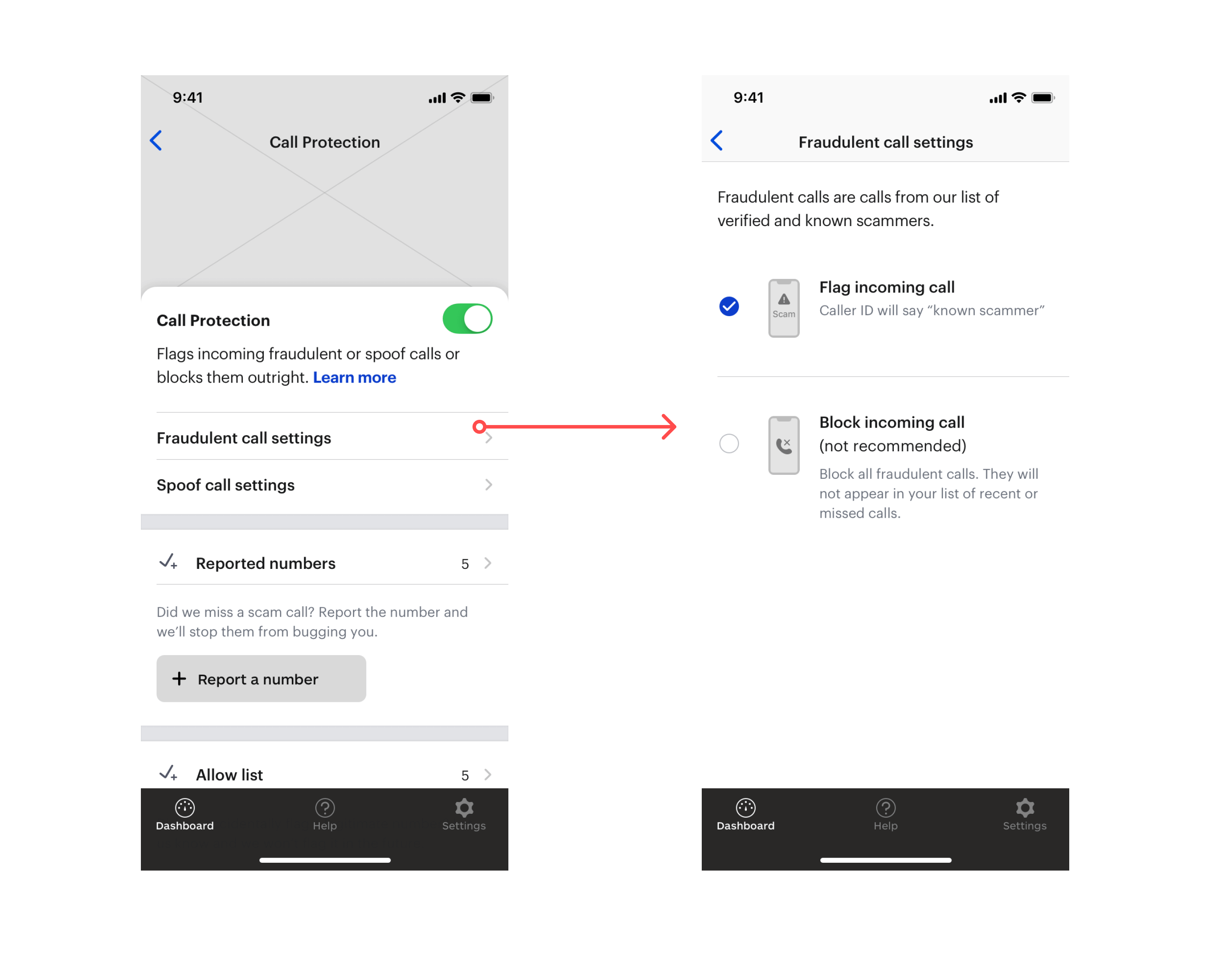 I started to work on the high-fidelity mockups - partnering with the illustrator to find concepts that would lend themselves to simple animations - when I decided to leave for another position.

I ended up finishing the UI work for this case study. The illustrations and colors chosen are my personal preferences and not a reflection of Malwarebytes’ design system.

Although I wasn’t able to see the project through to release, there are several metrics by which to measure success when it does ship.

We can gauge whether Advanced Web Protection was effectively integrated by measuring an increase in conversion from free to paid users.

We can gauge whether fixing the navigation and other usability issues were effective by measuring:
‍